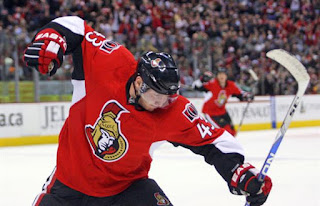 Well folks, I didn’t do a podcast last night – because the Ottawa Senators were facing the Pittsburgh Penguins in an elimination game.  If Ottawa lost, they’d be out of the playoffs in 5 games.  As it happens, they beat the Penguins in triple Overtime to win 4-3, and subsequently force a Game 6 back here in Ottawa.

So, I’m going to record the podcast when I get home from work tonight.  In the meantime, I thought I would find some high-energy music to inspire the Boys in Red.  I opened up Jamendo, and typed “kick some ass” into the search bar and found these artists:

That’s all that I found from that search.  So just for kicks, I decided to see what “Hockey” turned up, and here’s what I got: The’s Wil I Gome – DJ’s Hockey.  I really don’t understand the name, but hey, it had an interesting beat to it.  Something tells me there is a bit of a language barrier involved here.

That’s it!  By the way, the picture at the top of the article is of Peter Regin, an awesome rookie who has just been playing fantastic hockey in this playoff series – his first ever!  I think he might be my next favourite player after Alfredsson.