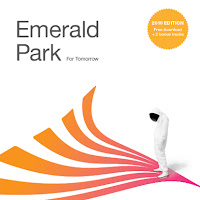 In my search for new 2011 releases, I listened to one of Blocsonic’s “netblocs”, which is basically a compilation album with tracks from their own label as well as other netlabels.  One of the songs I heard was “The Commonfield” by Emerald Park.  I loved it – the song was essentially a perfect catchy pop tune.  “The Commonfield” comes from the album For Tomorrow, an album originally released in 2008 by the Swedish pop group.

In 2010, netlabel 23 Seconds re-released the album for free and included a couple of bonus tracks.  I snapped up the album immediately after hearing “The Commonfield” and was pleased as punch to discover that the rest of the album is full of catchy pop tunes.  There’s a lot of vocal harmonies to be found on this album, backed by a big instrumental sound.