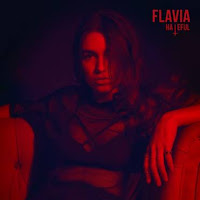 This past Friday June 1, electronic pop artist FLAVIA released a new single called “Hateful”.  Prior to this track, I had never heard of Flavia, so I’ll let the press release do some talking:

FLAVIA is an electronic pop artist based in Los Angeles, CA. She mixes dark pop and futuristic R&B, exploring the borderland of yesterday’s soul and tomorrow’s electronica. She started to write music at a young age in Ireland and Italy, where she spent her formative years. Having moved often growing up, she feels the closest thing to home-base in her music. “It’s a part of me,” she says. “I couldn’t escape it event if I wanted to.”

In listening to “Hateful”, I definitely caught wind of all of these influences in her music.  Oddly enough I also got a bit of a “Lorde” vibe in her music, which is not at all a bad thing.

Here’s some info about the new track:

Sharing a powerful message for kindness, strength, and human condition, Hateful was inspired by FLAVIA’s own real-life experiences. Reflecting on such experiences opened the way for the larger issues of animosity, division, and bullying in our society today. With the release of her debut single, FLAVIA hopes to reach out to victims of hatred and bullying, and to remind people to treat others with love and respect.

I can get behind that sentiment.  I think that a lot of people share her views toward bullying (online bullying especially) so hearing art related to that is welcome.  It helps take the power away from the people who would direct their hatred toward us.

As for listening the track itself, you can find it on Spotify!  Check out Flavia’s website at http://www.flavia.la, and be sure to check out her YouTube channel as well!  It opens up with the track “No Gravity” and it’s super cool.